A young woman was woken up by the loud snores of her boyfriend and annoyingly kicked him out of the bed. However, she was horrified when she realized that the noises were actually his dying breaths.

Lewis Little, only 25 years old, was earlier diagnosed with a rare heart condition called Brugada Syndrome which can cause abnormally rapid heart rhythms, but was assured by doctors that he would live a long and healthy life. Apparently, the assurance did not prove true.

Lewis Little, 25, pictured left with son Tyler and partner Lisa Lee, died due to a rare heart condition that gave him an abnormal heartbeat

According to his partner Lisa Lee, they were in bed that night when she heard him snoring loudly, so she kicked him out of the bed and told him to shut up. But then, she felt the sheets were wet and turned the lights on to see her boyfriend’s purple face. He was pronounced dead at the hospital. Lee later found out that the snoring sounds she heard was actually air leaving his body.

Lee said she tried to kick her boyfriend out of bed for snoring, but later realized the noise was actually his dying breaths

Due to this incident, Lee said she wanted to raise awareness of the deadly heart condition. She added that doctors did not prescribe an Implantable Cardioverter Defibrillator (ICD) to her boyfriend because they were told he was only a ‘low risk’ patient. Lee believes that an ICD could have saved Little’s life. 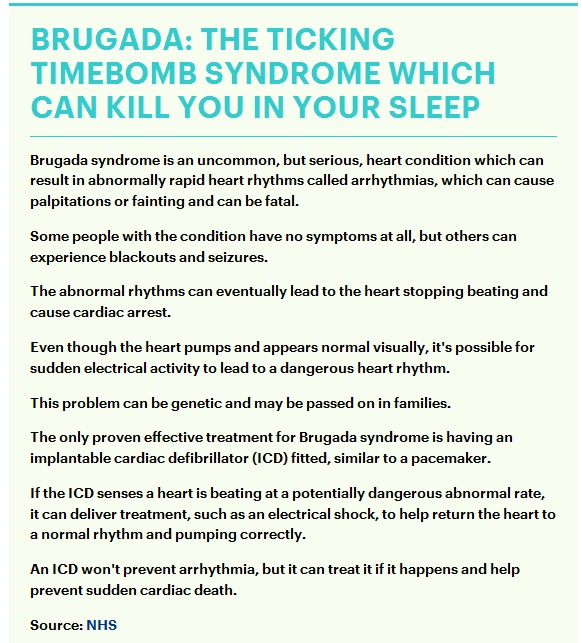 Lee now worries for their two-year old son’s life since the said disease could be passed on genetically and history may repeat itself. Brugada syndrome has been a leading cause of sudden cardiac death in young, healthy people. It is often not diagnosed due to the absence of visible abnormalities.

This unfortunate event also made Lee realize a very important thing, ‘It has just put everything into perspective, life is so short and I feel like I was very naive to think that nothing like this would ever happen.’

She has now launched a petition for patients to be given a choice to be fitted an ICD when diagnosed with Brugada in the UK Government and Parliament aiming for 10,000 signatures for the government to respond to it.